This page shows data of a 945 m² prescribed fire conducted in Northumberland (UK) in March 2010 (Dold et al., 2010). The NERC Airborne Research and Survey Facility (ARSF) participated to this experiment, collecting, amongst other datasets, high resolution (39 megapixel) Leica RCD105 digital frame camera imagery during a series of overpasses. One Leica image is shown above, and was compared with thermal imageries collected from a handheld IR imager (AGEMA 550) operated in flown from the helicopter located on the bottom left corner of the image. The IR imageries were used to derived maps of brightness temperature and fire radiative power (FRP).

The burn plot was a rectangle of 45 m by 21 m. The vegetation was a homogeneus fuel bed made of heather, with a density of 1.5 +/- 0.5 kg/m² and a moisture content of 60 +/- 2%. The fire was ignited simultaneously on the northern edge as a back fire line, and at the south east corner as an ignition point. During the fire, the helicopter was hovering around 120 m above ground, and was observing the plot with view azimuth and zenith angles of around 8 and 55 degree, respectively.

The animations below shows the raw thermal brightness temperature time-series, as captured by the handheld AGEMA 550 camera in the helicopter (left), along with the corresponding geo-referenced imagery from which fire behavior metrics can be derived (right) (see paugam et al 2013). Maps of Rate of Spread and Fire Radiative Energy (FRE) are shown below.

Some Pictures from the Ground: 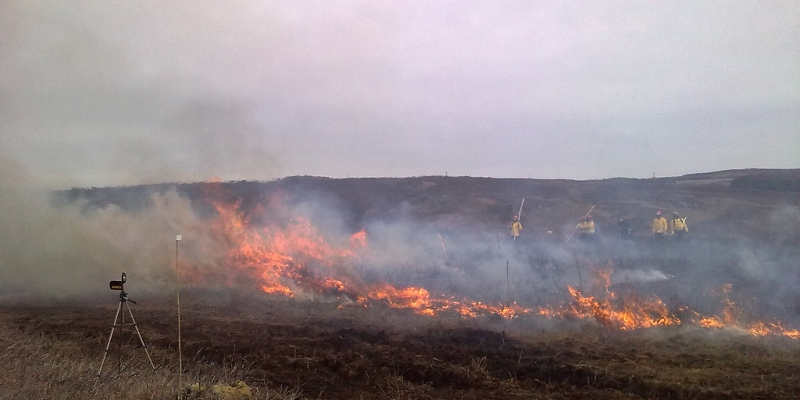 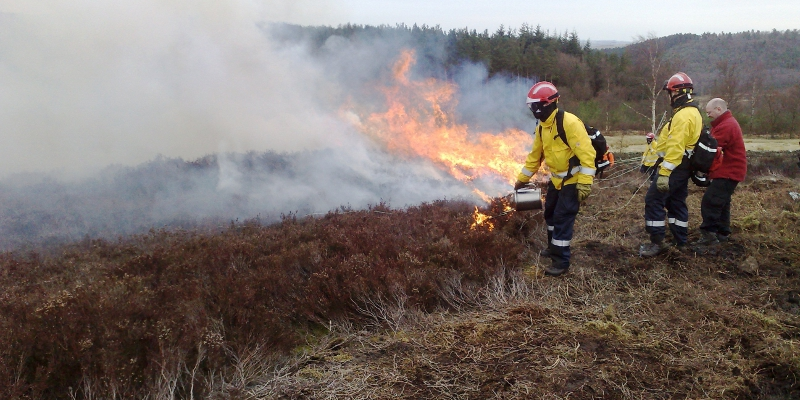 Paugam R., Wooster, M. J. and Roberts, G, 2013: Use of Handheld Thermal Imager Data for Airborne Mapping of Fire Radiative Power and Energy and Flame Front Rate of Spread, Geoscience and Remote Sensing, IEEE Transactions on , vol.51, no.6, pp.3385,3399, link to the paper