To simulate the fire-atmosphere interaction without modeling the fire behavior, high temporal and spatial observations of the fire are required. We use here thermal Middle InfraRed (MIR) Images collected during a fire campaign organized by Kings College London (Martin Wooster) in Kruger National Park (South Africa) in 2014.
The MIR images were collected from a helicopter hovering above a 7ha plot with an Agema 500 FLIR camera operated at 3Hz.

The fire we selected for this simulation was conducted on the plot 6 of the Skukuza plot strip of Kruger National Park. The vegetation type is Savannah with a low fuel load of 2.6 T/ha. Georeferenced images of the fire form a long wave thermal camera and a IR-modified Gopro camera operated together with the MIR camera can be seen here, while the MIR data with fire front Rate of Spread (ROS) can be seen below. All images are georeferenced on a 1-meter resolution grid.

From the georeferenced MIR images, the Fire Radiative Power (FRP) is computed following Paugam et al (2013) and a mean radiative flux is calculated for both flaming and smoldering fire regimes according to the local flaming residence time extracted from the georeferenced images with a simple threshold method (brightness temperature < 600K). The convective flux is then estimated assuming a radiative fraction of 10% (see figure below). 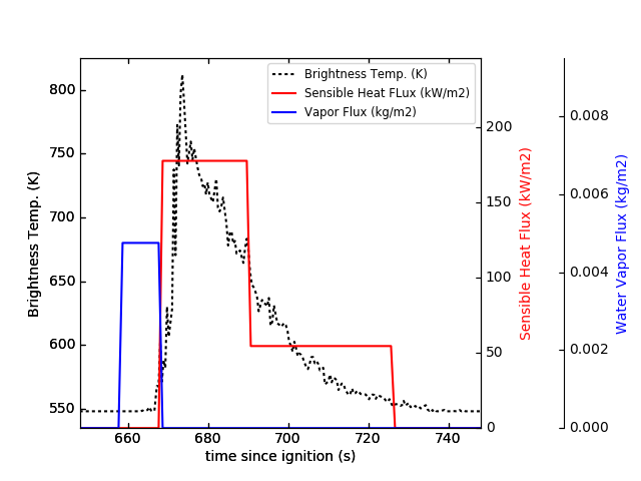 time series of measured brightness temperature at one location in the Skukuza 6 burn, with associated modeled convective and water vapor fluxes for the same location

The residence time and nominal flux of the different components of the flux model are mapped and pass together with an arrival time map to the meso-scale atmospheric model MesoNH via the interface of its fire module based on the ForeFire fire spread model. ForeFire ensures here the flux conservation from the 1m gridded map to the MesoNH grid. The MesoNH domain is a box of 1000x1000 meter square along 726 meter high with an homogeneous 10m resolution mesh stretched vertically above 570m with a 10% increase. In this first simulation, only the LES scheme of MesoNH is activated (e.g. microphysics is switched off). Ambient condition are set constant for the duration of the burn with a standard wind profile power law (1/7) and no lapse rate, and set using pre-burn measurement from a weather station located upwind of the plot (2m/s at 2m above the ground, 20 degree, and 33% humidity).

Result from the MesoNH simulation is shown below. This is a perspective view of the scene for an observer located upwind. It shows the advection of the passive tracer, the convective flux at ground level and iso-contours of potential temperature at the outlet of the domain.